A Creative Music and Live Recording Studio and Art Hub

$10-7pm & 8:15pm-Ole Mathisen - sax and computer; Matt Garrison - bass and computer; Marko Djordjevic - drums;-Many people have witnessed the magic of a Take Off Collective live performance over the last four years. We lost count of how many times. Artist Dean Russo has been in the audience! There have been numerous post-show talks about art, music and life involving Dean, Matt, Ole and Marko.

Dean will become Take Off Collective's fourth member  on this day- he will create expressive spray paint artwork on stage during the music performance! Please join us!

Mestizos is an ensemble that exudes a unique, yet familiar melodic and rhythmic expression of the afro-latinx sound. Formed by trombonist Armando Vergara, Mestizos adds a new ‘wave-length’ to the latin music scene of NYC.

True East is a trio collaboration between trombonist Dan Lehner, bassist Ran Livneh and drummer Zack O’Farrill. A synthesis of post-bop jazz, Afro-Latino rhythms and indie rock sensibilities, True East is an expression of the idiosyncratic New York musical landscape, making music that is compact in execution and expansive in concept 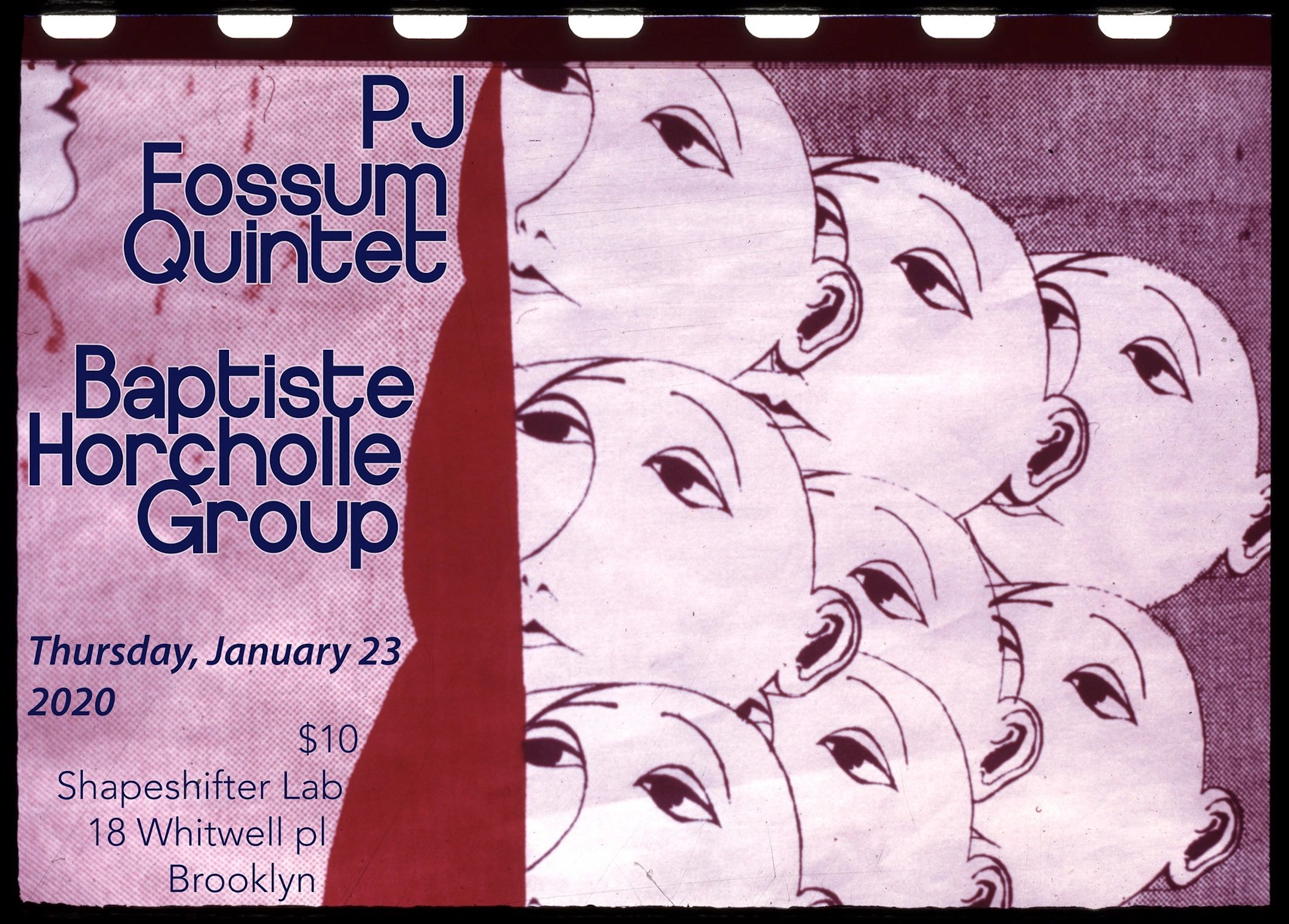 The PJ Fossum quintet will be playing original music blending elements of jazz, avant-garde and contemporary sounds. Paul Jacob Michel Fossum is a Canadian Composer and Pianist currently residing in Brooklyn, New York. He is a recent alumnus of The New School for Jazz and Contemporary Music, Banff International Workshop for Jazz and Creative Music and the Mount Royal College Jazz Program.

Originally from Nice, France, Baptiste Horcholle currently resides in Harlem, New York where he regularly performs as a sideman. Baptiste plays Tenor and Soprano Saxophones, flute, and piano in different settings of music from metal to pop, with classical and jazz influenc

An interactive music-making experience for families & kids of all ages!

Australian born vocalist and composer Alyson Murray leads her all-female ensemble at ShapeShifter Lab, Brooklyn. Performing a body of her original musoc and some arrangements of your favorites, including, 'Dreams' Fleetwood Mac and 'You Rock My World' Michael Jackson. Alyson has taken this music from Australia to the U.K., Canada, and the U.S. Known for her uplifting and positively infectious sound. Bringing something truly special to the table, through soul, jazz and RnB.

Join us for a special performance, featuring Roberta Escamilla Garrison for a truly unique experience, on Wednesday, January 29th! Born in San Francisco, at 5 years old she began studying at the San Francisco Ballet School. Moving to New York in '66, she lived the great season of ferment which animated Manhattan in the Sixties and the Seventies. The wife of the well known jazz musician, Jimmy Garrison, she breathed the electrifying atmosphere of the New York Jazz scene and the Judson Church. After having studied with Merce Cunningham, Dan Wagoner, she studied, danced and collaborated with Elaine Summers and Viola Farber. Her sensibility for the language of Jazz brought her to the discovery of an original approach to choreography through improvisation. Settling in Italy, she intensified her rapport with Jazz. In 1981, she presented an evening work entitled "Everyday Company". This became the name of her Company the she founded thereafter. Since then the Every Day Company has been invited to participate in prestigious Dance Festivals. Another important aspect of Garrison's work is her teaching. She has introduced her interpretation of the Cunningham technique and raised new generations of Italian dancers. She was guest teacher at the Centro Internazionale di Danza and in 1988 she founded the Dance Department at St. Stephen's School. At the beginning of 1990 the Everyday Company joined forces with Aurelio Gatti's Mimo Danza Alternativa and founded MDA Produzioni Danza. For many years, she also taught at the Accademia Nazionale di Danza in Rome. The last course she held was in 2018: A Master in Improvisation for musicians and dancers.

Take Off Collective members Ole Mathisen (sax), Matthew Garrison (bass) and Marko Djordjevic (drums) became friends at Boston's Berklee College of Music as the second millennium was winding down. Since then, they have built careers as bandleaders; sidemen to world renown notables as well as unique and innovative instrumentalist. Their eclectic tastes, penchant for honest and unpremeditated improvisation and a thirty-year strong friendship brought them to a musical situation different from any other they have taken part in to date. Each Take Off Collective concert is a moment ceasing, supremely intimate, music-transcending event. Unique and unrepeatable. Catch the next one - there will never be anything like it again!

Sign up to hear from us about our upcoming events and announcements.